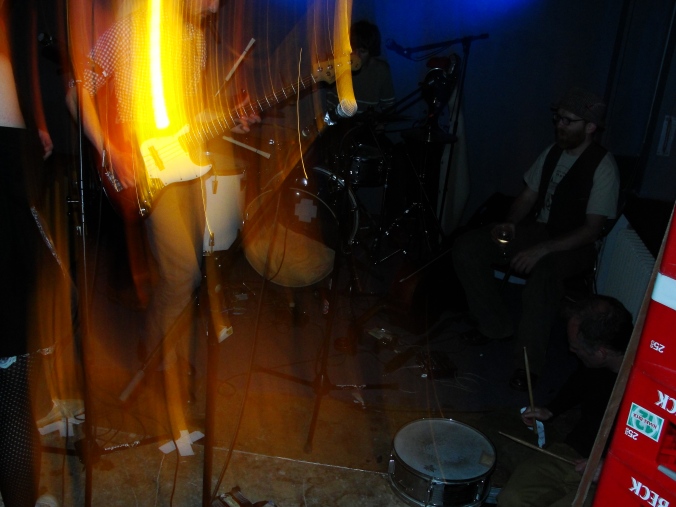 You find us (me anyway) somewhat worse for tour wear today. I awoke with a raging sore throat that makes me think there is a large metallic pan scourer lodged in the place where my tonsils once were.

Ill health aside – and a hot lemon honey is doing wonders – it has to be said, the tour has been pretty darn good. After my last correspondence, we took a trip to Hannover and found a beautiful intimate venue. The orange painted toilets have a reed organ by the sink, ready for you to hammer out some chords while you think about washing your hands.

I should have probably done the washing first, thinking about it now.

The owners were amazingly hospitable and cooked us some rather excellent spinach lasagne and told us to help ourselves to anything, make ourselves at home. This is quite a thing to say to a bunch of borderline alcoholics from Brighton. Tom will start pulling yoga assanas in the carpark. Marcus will make perpetual loud noises on loud-making things. Emma will ask if you’re definitely sure it’s ok to make a cup of tea. Jacob will smoke in your bed and ask you to fix him a sausage and roasted pepper baguette. I will eat all the chewy sweets and look at the toilets, adoringly.

The venue was packed to the rafters and I had an enjoyable Laish set, beginning to find confidence in some of the new songs that I am playing. I felt good that night, excitable and rested after a lot of neck breaking van sleeping.
Sons had a great time. This gig had Marcus finding new ways to terrify an audience with rumbling bass sounds as the songs drift in and fade out. Tom’s erudite banter has taken a backseat in favour of the brooding swell of drones and new improvised movements.

We later retired to stay with a lovely chap who provided us beds, Neil Young vinyl, card tricks and a satisfying breakfast.

And then to Bremen. On the way, we were arrested by the sight of a car ahead engulfed by flames and billowing smoke. The police managed to get to the scene before we did, and thus we had a half hour stop on the autobahn where Dennis filmed us performing a live take of The Drink Drive. Fire engines finally arrived to put out the flames and we watched from the top of the Tourneo, hoping that no one was still in the totally burned out little car. And before we knew it, we were back on the road.

For once we had time to have a good wander around the city, to roll up our sleeves, put on our sunglasses and eat ice cream. We stopped by a river (like the scene of a classic Sons of Noel song) and a pretty girl came up to us and, in English, asked us which band we were in. She said we looked like an English rock band. She then offered me her boyfriend’s guitar. That’s not a euphemism. I played her Ease Down the Road, the Bonnie Prince Billy song about borrowing a fireman’s wife for a dirty adulterous roadtrip. We offered them guestlist places to the show, but they never turned up.

The gig was in a beautiful converted warehouse next to an art gallery showing some rather far out images of industrial toxic waste taken from the sky. It was also located by a busy railway track. Going for a piss, I would find myself inwardly chuckling that Marcus was making evil noises on his loop pedal again, when actually it was the sound of a freight train, moving dead trees from one side of Germany to the other.

The gig was preceded by excellent home made pasta. As you can probably tell, I get very excited by good tour food.

The show was rather sparsely attended despite what seemed like good postering around town and a very reputable promoter. This did not stop the evening becoming something of a turning point in the tour. Laish grew from a solo project to a four piece for my final song, She is Clever I am Not. Marcus on drums, Alistair on cornet and Will on cello. It was a joyous moment. We had a quick run through in soundcheck and just went for it.

The Sons set was the dirtiest and loudest it has been. Are we even a folk band anymore? And for the first time, we ventured into the middle of the crowd, unplugged, to play Leaving Mary’s Hand as an encore.

Then, I don’t know quite what happened but we spent the following three hours engaged in some kind of gargantuan tribal nonstop wig out dance party. By this point, only our sound man and promoter remained, but we endlessly swapped instruments and played rocking jams until we collapsed in a hysterical heap.

We awoke, tightly bonded and all a bit ’what was the bad thing again?’

And so to a very long autobahn trip to Frankfurt, back to the Yellow Stage that we triumphantly mashed up quite skilfully last year. Home to Hazelwood Vinyl Records and with strong ties to the Willkommen Collective, we were very excited to be back.

Arriving early, we took a quick jaunt around the local lake. Picked some wild garlic, made a soup when we got to there. Bish bash bosh. This is what you get, I did warn you.

Unfortunately tour was beginning to take it’s toll on my throat and I was feeling pretty dark prior to my show. We watched the very talented Benno and his band play a good opening set. While watching them I was trying really hard to psyche myself up, despite feeling rotten and bruised inside. I think I had Freddie Mercury’s words swimming around my rattling brain. The show indeed must go on.

It was, I think, my best performance thus far and I was joined by my sexy new band for another song, A Happy Accident. I’m hoping I may have secured a five album German record deal off the back of that gig…

Went out for a barbeque with the cool kids in the carpark and then went back to rock even harder with Sons. This show was our smoothest flowing, those new interludes working a treat on maintaining the intense atmosphere of our sound.

A relatively early night for me, prompted by Alistair remarking that I looked like I was going into slow motion. That’s a good sign that it’s time to go to bed.

Tonight is Preslav Berlin. It is also Dennis’ (our German booking agent and friend) last show with us. We have been teaching him some new English phrases and moments of aggressive folk etiquette. When we get loud and intense, he starts yelling as loud as he can. When we play some of our larger tunes, he shouts ’Big Tune’. When it’s time to leave, he says, ’Let’s Do One’. He is also familiar with commonly used terms like twink, gash and doobie. We are gonna miss him.